Enmais one of 21 high quality swords, currently in the possession of Roronoa Zoroas one of his three blades.

Until 20 years ago, Enmawas wielded by Kozuki Oden alongside his other sword, Ame no Habakiri. In Oden's hands, the two blades became the only weapons known to have ever (to this day) injured Kaidou. After Oden's death.

Appearance of the Enma Sword

On the cover of volume 96, Enmais seen as a moderately curved Shobu Zukuri style katana with a lilac and gold color scheme. Like Ame no Habakiri, the tsuba is cloverleaf shaped and each lobe has a hole in the middle and is profusely grooved. 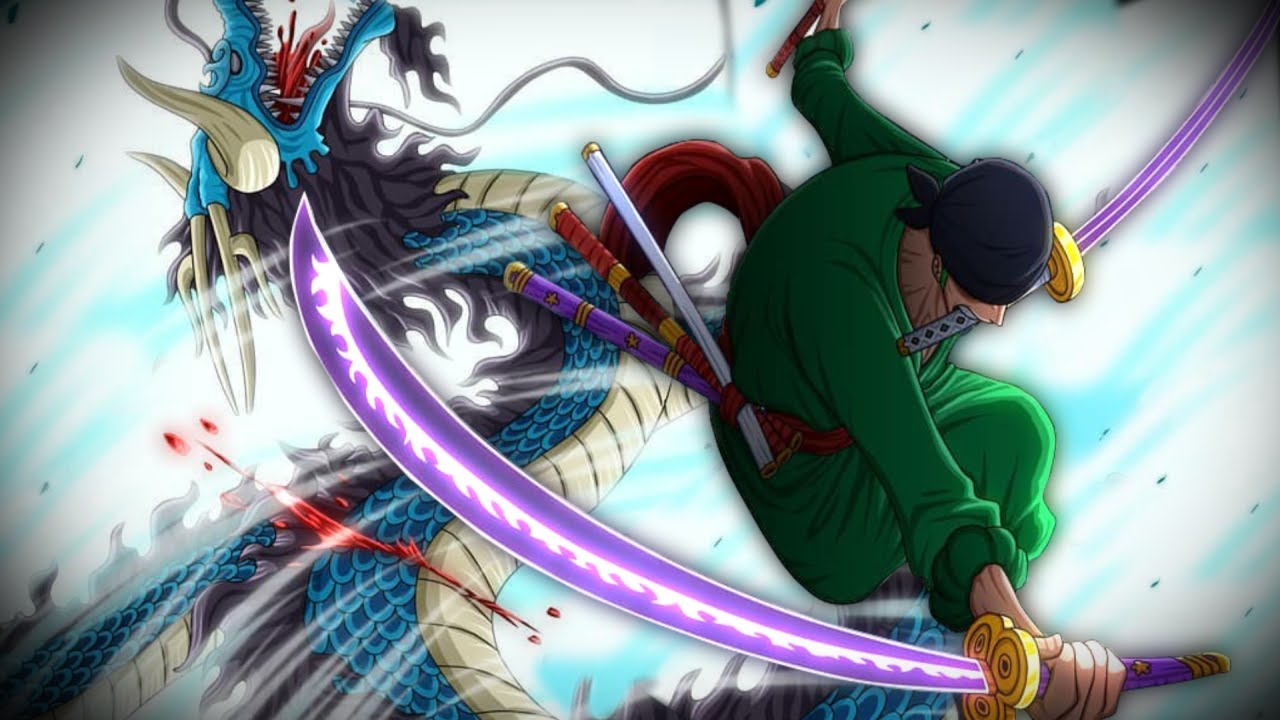 The tsuka is lacquered in solid lilac (rather than wrapped in cloth), just like the saya. Both are adorned with simple golden floral designs with five petals on each side. The kashira and kojiri match in appearance, being large with shamrock cutouts to match the tsuba; the kojiri has an additional accent, which appears to be a large buttoned ring above. Like the Kitetsu swords, Enmaalso has an irregular flame-shaped hamon

Three pieces of cord are present on the sword: one directly above the kashira (no dangling end), another on the saya a little below his mouth with two dangling and bushy ends (serving as sageo), and yet another cord lower. on the saya (again no dangling end). In addition, there is a bit of bandage on the tsuka for a better grip.

What are the capabilities of the Enma Sword

As a masterpiece of the legendary smith Shimotsuki Kozaburo and one of the 21 high quality swords, Enmais among the best swords in the world, Kozuki Hiyori considering it a worthy replacement even for the legendary Shusui. Tenguyama Hitetsu described Enmaas capable of "cutting to the bottom of hell" (parallel to Ame no Habakiri capable of "cutting the sky itself"). Kozaburo himself considered Enmahis best masterpiece compared to all his other creations, including Wado Ichimonji.

Enmaalso has the distinctive trait of extracting Busoshoku Haki (known as "Ryuo" in Wano) from its wearer in excessive amounts when swung, cutting much harder than expected. This makes it extremely difficult to wield, so much so that Oden was the only one to ever tame Enma. After testing it for the first time, Zoroaccidentally ended up cutting a large section of cliff from its base after initially attempting to cut a tree, with Enma not only forced to harden, but emaciating his entire arm.


History of the Enma Sword

Once in the past, Enmawas created by the famous blacksmith Shimotsuki Kozaburo. Due to its special attributes, no samurai had managed to wield Enmauntil it was finally acquired by Kozuki Oden, who managed to master it as part of his Oden Two Sword Style. Oden then used Enmato injure one of the four emperors, Kaidou , giving him his only scar. After his death, it was entrusted to Hitetsu for safekeeping in order to pass it on as a legacy to Oden's daughter, Kozuki Hiyori.

After Hiyori begged Roronoa Zoroto leave the stolen Shusui, a sword of grade O Wazamono in its rightful place as a national treasure in Wano even though it had gained the sword from its former zombified owner, she offered Enmaan equal replacement. Zoroaccepted Hiyori's proposal to send Shusui back to Enma, despite Kawamatsu's initial protest. After obtaining Hitetsu's sword, Zorotried it out and learned its distinct properties, which he accepted, and trained during the period before the raid on Onigashima to gain additional mastery over Enma.