The current wind Hashira. He is Genya Shinazugawa's older brother and is always running away from him. Although he seems to dislike his brother, Sanemi actually intends to get him out of the Demon Slayer Corps so that he can lead a normal life. He is one of the two Hashira who survived the final battle against Muzan and the High Moons, the other being Giyū.

Sanemi was raised as the eldest son of 7 children and lived with both parents. He grew up in a home where his father constantly picked on all of the children as well as Sanemi's mother, until he was finally stabbed and randomly killed.

One day, Sanemi's mother did not come home, leaving the children to worry about her. Just as Sanemi was about to go looking for her, a loud banging sound was heard at the door. The children opened it only to be immediately slaughtered by their mother who had turned into a demon. In order to protect her siblings, Sanemi took her mother out of the house and left her younger brother Genya to take care of the siblings.

After settling the injured children in the house, Genya frantically started looking for a doctor to take care of the children. As he leaves, Genya discovers Sanemi in the middle of the road with her mother lying dead at her feet. Genya yells at Sanemi that he is a "murderer" and angrily accuses him of murdering their mother.

Later, it is revealed that upon killing his mother that night, Sanemi lost the ability to see and perceive colors, seeing everything in black and white and making it difficult to see at night, probably due to the psychological trauma caused by his mother's murder and his brother's disowning, now distraught and suffering because of these events, Sanemi began to hunt demons on his own with suicidal devotion, having no idea about Nichirin Blades. Instead, he armed himself with a mountain full of weapons and began to fight the demons by himself, where he then resorted to a crude method of killing the demons, where he would first neutralize and capture the demon, and then wait until morning, where he would then proceed to chain up his captured demon and let the sun destroy them.

Despite this brutal and reckless fighting style, he managed to survive and kill several demons. Later, recalling his past exploits, Sanemi admitted that the only reason he survived was due to pure luck and the unique aroma of his blood that caused demons to become intoxicated, drunk, and less focused in their battles.

He met a legitimate demon killer named Masachika Kumeno, who then helped him and introduced him to a real trainer. At the end of his training, he teamed up with him to defeat one of the twelve demon moons, specifically the Lower Moon, where Kumeno later lost his life in battle, leaving Sanemi as the only survivor, where he was then promoted to the higher ranks of the demon slayer corps and given the rank and title of Wind Pillar. Sanemiis abrasive, hot-blooded and stubborn, often impulsive and quick to lash out. The only person he has shown respect to is Kagaya Ubuyashiki, and it was only after he realized that the man was much more than his outward appearance suggested.

Sanemi's cold, rude and contemptuous behavior is the result of losing too many people he cared about in the past. Later, when he sees those people who have passed away, like his mother, he can't help but smile at her so he can see her again. When Genya joins the Demon Slayers in search of Sanemi, Sanemi hurls insults at him, but Tanjiro Kamado is able to say that Sanemi didn't really hate him; and in fact, he still carried the same brotherly love that he had for him in his childhood. However, he never expressed that brotherly love, because he tried to push Genya away from him and the demon killers so as not to expose him to danger.

Because of all the people he has lost to demons, he harbors a deep hatred for them and is convinced that humans and demons can never coexist. When Sanemimakes a decision, it is extremely difficult to dissuade him: he does not believe Tanjiro's insistence that Nezuko Kamado should not eat humans, and he tries to prove that he is right by stabbing the box in which Nezuko is kept[4]. After pulping her, he cuts off his arm to try to get her to attack him, due to the effect of her rare blood. Even though she doesn't, and Kagaya uses this as proof that Nezuko won't attack humans, Sanemidoesn't really accept the Kamado siblings.

Tanjiro is finally right about Sanemi. Despite his mistreatment of his brother Genya, Sanemireally loved and cared for his brother. He even expresses his wish that Genya settle down and have a family.

After the battle with the top rank, Sanemi not only shows great anger and emptiness towards Muzan, but also more cooperation with people like Giyu, with whom he clearly did not get along. Even when Sanemi is thrown out of the battle with Muzan, he shows undeniable courage and determination, as do his fellow pillars.

When the showdown with Muzan is finally over and time has passed, Sanemi has clearly mellowed a bit. He is able to smile with Giyu, even after their past confrontations. More surprisingly, he admits his mistakes and apologizes to Nezuko for his actions. He can't help but smile and pat her on the head, as he even sees Genya in the way she reacts. 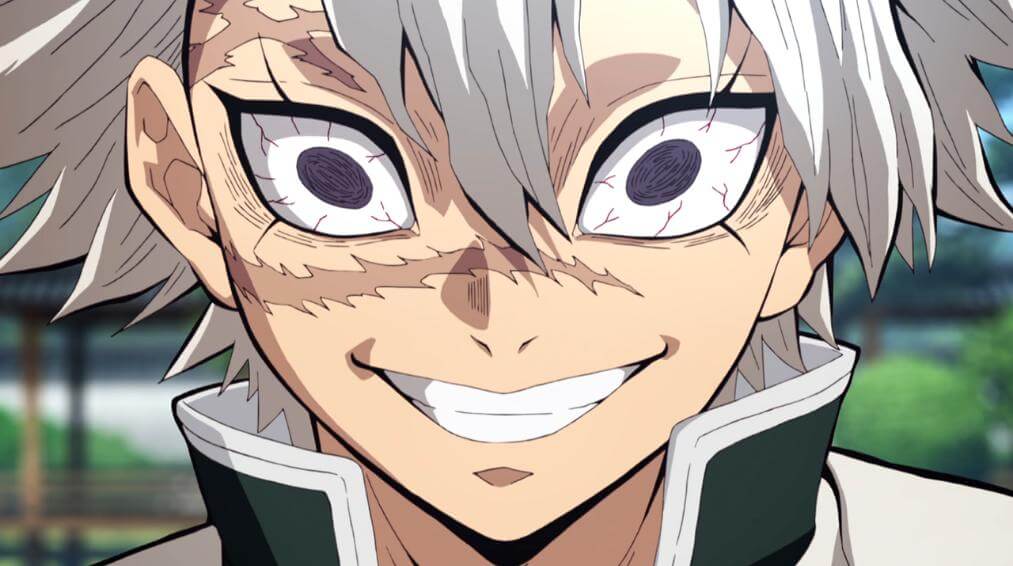 As a Hashira of the Demon Slayer Corps, Sanemi is a very powerful swordsman[5]. According to Kokushibo, Sanemi's physical abilities and techniques have reached their peak.

Master Swordsman: As a Hashira of the Demon Slayer Corps, Sanemi is one of the most powerful and skilled swordsmen in the entire organization. Sanemi's sword skills and techniques are incredibly powerful and refined, impressing even the Kokushibo, a top rank 1 Demon who has hundreds of years of skill and experience behind him.

Blood Intoxication (Marechi): Sanemi's blood has proven to be one of the rarest types of blood, making it incredibly intoxicating and appetizing to demons. It is also unique because of its intense power: the slightest whiff of his blood immediately makes demons salivate and lose their concentration, as his blood was able to affect the strongest of the higher ranks, Kokushibo. Despite the power of her blood, Nezuko has proven herself able to resist it due to her own conviction and will not to eat humans, which is further cemented and strengthened by the hypnosis implanted in her brain by Sakonji Urokodaki.

Crimson Red Nichirin Blade: During the battle against Kokushibo, Sanemi strikes Gyomei's spiked flail with his sword, turning them both briefly red. Later, in the battle against Muzan, Sanemi, learning from his previous encounter, forcefully strikes both his and Giyu's sword, turning both their blades temporarily red. Turning your blade red gives you the ability to hinder the regeneration of demons. 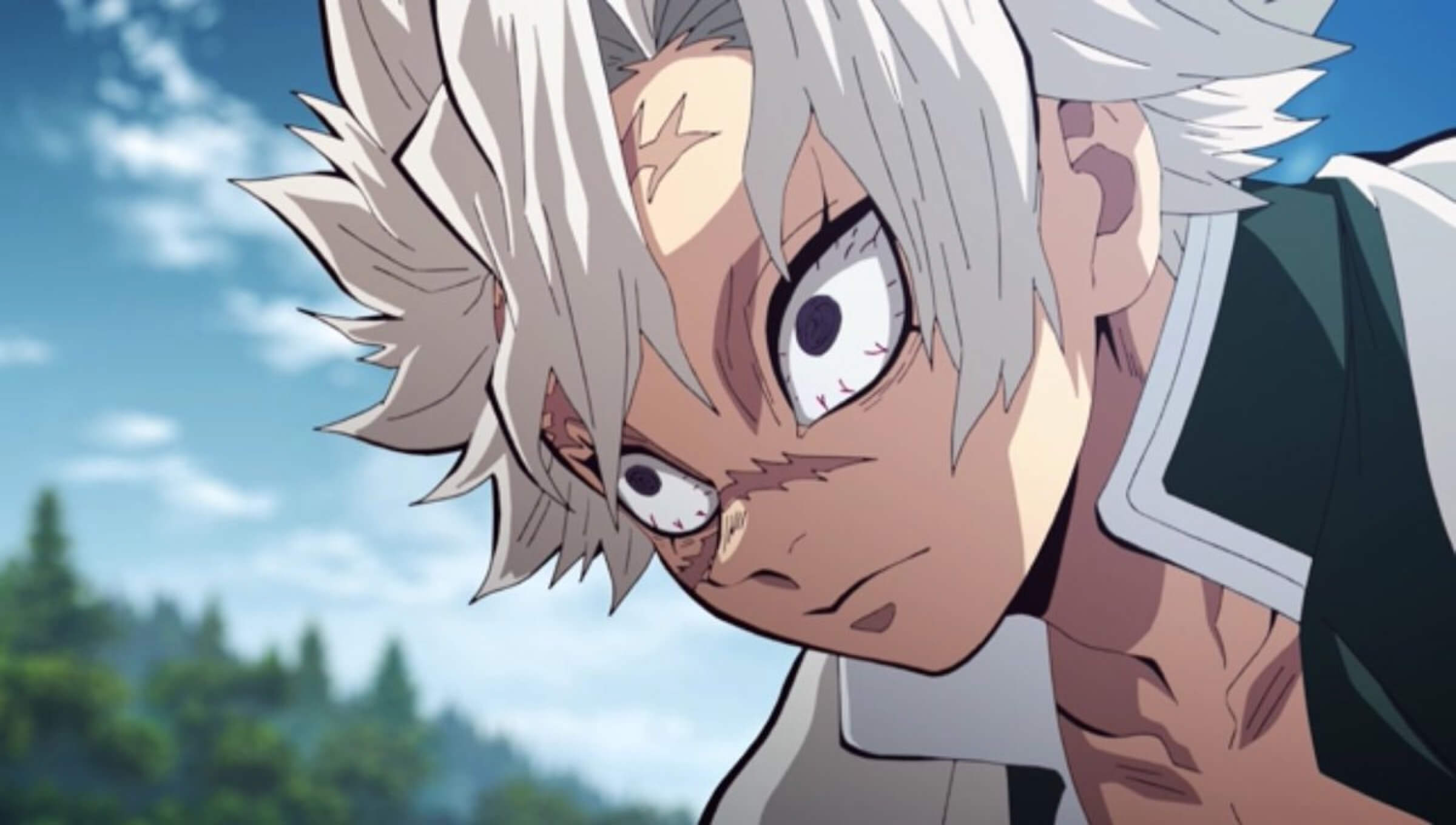 Mark of the Demon Slayer: Later, during the battle against Kokushibo, the Top Rank 1, Sanemi awakened his own mark which takes the appearance of a paper windmill with two dots on both sides of his right cheek. This mark greatly increases his power and abilities, as seen when Sanemi was still able to fight and wrestle Kokushibo on a flat field, despite a serious injury and a gash in his abdomen. This shows that his physical stamina, strength and pain tolerance were greatly increased. However, he could not deal a significant blow to Kokushibo without the help of Gyomei and Muichiro. Moreover, without the intervention of Muichiro and Gyomei, he would have been put in a state of imminent death twice by Kokushibo.

The art of the sword Fifth Form: Cold Mountain Wind - Sanemi strikes from above while falling in a multitude of sword strikes in an arc.

Seventh Form: Gale - Sudden Gust - Sanemi jumps into the air while swinging his blade, generating a violent wind that tears his opponent apart.

Ninth form: Idaten Typhoon - Sanemi does a backflip in the air and, with his head down, swings his blade to release a circular gust of wind.