Tanjirô Kamado (竈門かまど 炭た ん治じ郎ろう Kamado Tanjirô )is the main protagonist of Demon Slayer: Kimetsu no Yaiba . He is a demon slayer in the body, who joined to find a cure to turn his sister, Nezuko Kamado, into a human and to hunt down and kill demons, and later swore to defeat Muzan Kibutsuji, the Demon King, in order to prevent others from suffering the same fate as him.

Overall Abilities: From the beginning, Tanjirohas proven to be a prodigious fighter, with a strong natural ability to fight, especially with the sword. Tanjirowas once advertised as having superhuman characteristics, such as extraordinary senses, heightened sense of smell, immense willpower, and high intelligence. His naturally acquired abilities go so far as to allow him to outwit and catch Giyu Tomioka, one of the most powerful demon killers, off guard and deal a fatal blow to him despite his intense emotions. Moreover, in his first encounter with a demon, Tanjiromanaged to slice the neck of the temple demon.and impress it, later being able to push the demon away with an ordinary hatchet and come up with unique solutions such as using his durable head to headbutt the temple demon and also using his hatchet to pin it down and prevent it from moving. 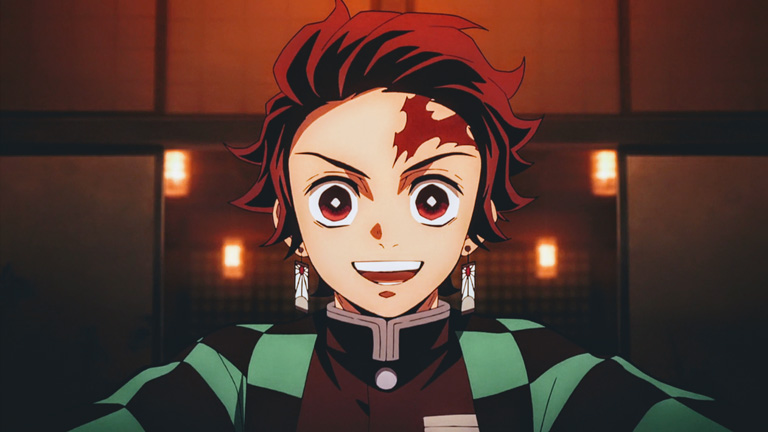 On Mount Sagiri, Tanjiro managed to impress Sakonji Urokodaki, the former Water Hashira, by avoiding dozens of traps hidden all over the mountain with some success through the use of his keen sense of smell and finally managed to be accepted as his student. When he was assigned to cut a giant boulder, Tanjiromet the spirits of Makomo and Sabito, who trained him to use full concentration breathing correctly.and perfect his fencing skills. After half a month of extremely intensive training, Tanjirowas able to surpass Sabito in a fencing skill, awakening the ability to see the "opening wire" and being able to cut the boulder in half, a bigger and harder boulder than any student before him had cut before. In the final selection, he was able to easily eliminate many low level demons while using the water breathing style without the help of others. Tanjirofinally met the hand demon, a highly mutated demon that ate 50 humans compared to the average two to three humans that mountain demons consume, making it the most fearsome demon Tanjirohad met so far, which was further proven by the fact that it had killed both Sabito and Makomo. Thanks to his acrobatic skills, his prowess with the sword and his sense of smell, Tanjiromanaged to decapitate the demon.

After officially becoming a member of the Demon Slayer Corps, Tanjirofaced many more powerful and skilled demons, most of whom used Blood Demon Arts. Against the Swamp Demon, Tanjiroand Nezuko managed to subdue the demon and its clones, saving the life of an innocent woman. Against Yahaba and Susamaru , more skilled and fearsome demons, Tanjiro'stactical intelligence and sword handling skills allowed him to decapitate Yahaba by himself, while successfully defending himself against Susamaru. During the Tsuzumi Mansion arc, Tanjiromet Kyogai, a former member of the Twelve Kizuki, an organization of the twelve most powerful demons in existence, and was able to analyze and adapt to his unorthodox demonic art and defeat him. Although he was still the lowest rank in the organization, Tanjirocould defend himself against the demons that shared the powers of an actual member of the Twelve Kizuki, namely the Mother Spider Demon and the Father Spider Demon , and later defend himself against the member himself, Rui , who held the position of lower rank five. After recalling the Hinokami Kagura , a breathing style he learned from his father as a child, he almost defeated the lower rank demon, a feat that many believed only a Hashira , the most powerful swordsmen in the entire Demon Slayer Corps , could pull off. 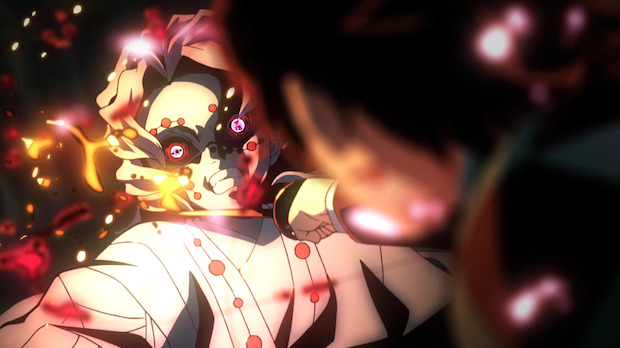 During the rehabilitation training arc , Tanjirorecovered from his injuries and also trained with Kanao Tsuyuri , an extremely talented demon slayer and the Hashira bug Tsuguko, Shinobu Kocho , managing to match him at the end of the arc. After mastering Total Concentration: Constant (全ぜん集し ゅ う中ちゅう・常じょう中ちゅう Zen Shūchū Jōchū? ), which further enhanced his physical abilities, Tanjirowas able to fight and decapitate the lower rank Enmu, by himself, even managing to find a countermeasure to the demon's spells in the middle of the battle and possessing enough willpower to commit suicide. in his dreams to follow through with his plan. Later, with the help of Nezuko, Inosuke, Zenitsuand Kyojuro Rengoku, Tanjirodecapitated the most powerful demon of the lower rank. With Kyojuro's death at the hands of the top rank three, Akaza, Flame Hashira's last words were a major incentive for Tanjiroto continue, serving as a major factor in his growth as a demon slayer.

Master Swordsman: Tanjirohas always proven himself to be a swordsmanship prodigy, his skills rivaling those of one of Sakon Taki's strongest students, Sabe Tou, and he surpassed him in six months and avenged him by defeating Tetsuma. Although he is at the water level, his swordplay is superior to many of the old ones, and even defeated the two inferiors of Twelve Wood Moon. His improvement in swordplay is also remarkable, months after recovering from an injury, he can face higher order demons and has no experience in fighting them, which is a testament to his former enemies of this ability. This is obvious as he is able to follow and defend himself against Daki.

The hammering of the belt attacks as well as Gyutaro's, although the latter is very skilled at swinging his double Kama and has more than a century of experience in wielding it. Mitsuri Kanroji commented that to accomplish such a feat is equivalent to 5 to 10 years of intensive training.

He practiced in Sword Xiu Village, and his fencing and swordsmanship are comparable to that of the strongest Zhuzhu swordsman in the entire Demon Slayer legion. Tanjirothen managed to outrun Akaza, a martial arts prodigy with over a century of hand-to-hand experience. Although he is not as good as Tsuji Country Raiichi, he can still be on par with Wushan, showing his supreme mastery of the sword and becoming one of the strongest swordsmen in the contemporary era.

Water Breathing: Taught to him by Sakonji Urokodaki, a former monk of the water column and water breathing, this is Tanjiro'sfirst form of breathing. He became very proficient in it, which allowed him to deal with the two members of Twelve Moon, Mizuho and Enmu. However, since his body was not adapted to water breathing techniques, Tanjirodecided to switch to Hino Kagura as his main breathing method. Nevertheless, Tanjirodid not give up what he had learned and combined water breathing with Helio Kagura, because the pressure Sun Kagura exerted on him was a stronger blow than when he used water breathing alone and walked around. Longer than using Hino Kagura alone. He did it to save Hinatsuru from Gyutaro. and then used it again in Infinity Castle Arc to kill dozens of demons.

What are the weapons and equipment of tanjiro?

Standard Katana: As a demon slayer, Tanjirouses a standard size and shape katana. His first katana was forged by Hotaru Hanezuka. Originally a standard metallic color, it turned dark black the first time I held it. He can also make it bright red with Nezuko Kamado's Bloodthirsty Demon trick or when he makes it bright red with his Demon Slayer Mark. His original hilt was a black ring, connected to the core by lines, with a border of the same color, looking like a wagon wheel.
In addition to his katana, Tanjirohas a standard dark black sword sheath. Tanjirohas damaged or broken his sword a total of 3 times: the first in his fight with Rui when the latter's edge cut him in half, the second when Akaza cut him to pieces in a fit of rage, and the third in the fight with Daki when he chipped the blade after facing the higher rank.

After the Swordsmith Village arc, he switched to using the katana he found inside Yoriichi Type Zero which was sharpened and polished by Hotaru Haganezuka. His handle was also replaced by the one used by the late Kyojuro Rengoku, which has the shape of a flame with a red core and an orange border. The new blade was not observed to change color, being already in deep black but with a more complex pattern, with the word Slay (滅め つ Metsu? )engraved on the side. It is implied that it is stronger than the standard Nichirin Katana, as Haganezuka mentioned that the steel was particularly good quality. It is further implied that the previous bearer of this sword is the legendary Yoriichi Tsugikuni. While Tanjirohas a notorious habit of damaging his swords in encounters with demons, this sword only broke at the end of the final fight with Muzan Kibutsuji. The sword was to be repaired afterwards and displayed as a decoration in the house of his descendants.