Known by the alias Hawk Eye, 🦉 Dracule Mihawk(Jurakyūru Mihōku) is part of a group of famous and powerful pirates who formed the 7 Great Corsairs. He was the first Corsair Captain to appear in the One Piece series and remained so until the group was disbanded.

Bearing the title of the World's Greatest Fencer 🤺, Mihawkwas ZoroRoronoa's mentor during the two years of the ellipse. He played an important role during the Baratie Arc having been the third antagonist following Don Krieg and Gin the Raging Demon. He was also one of the main antagonists in the Marine Ford arc, siding with the Navy like most of the other Grand Corsairs in the famous Battle of Marine Ford in 1522. 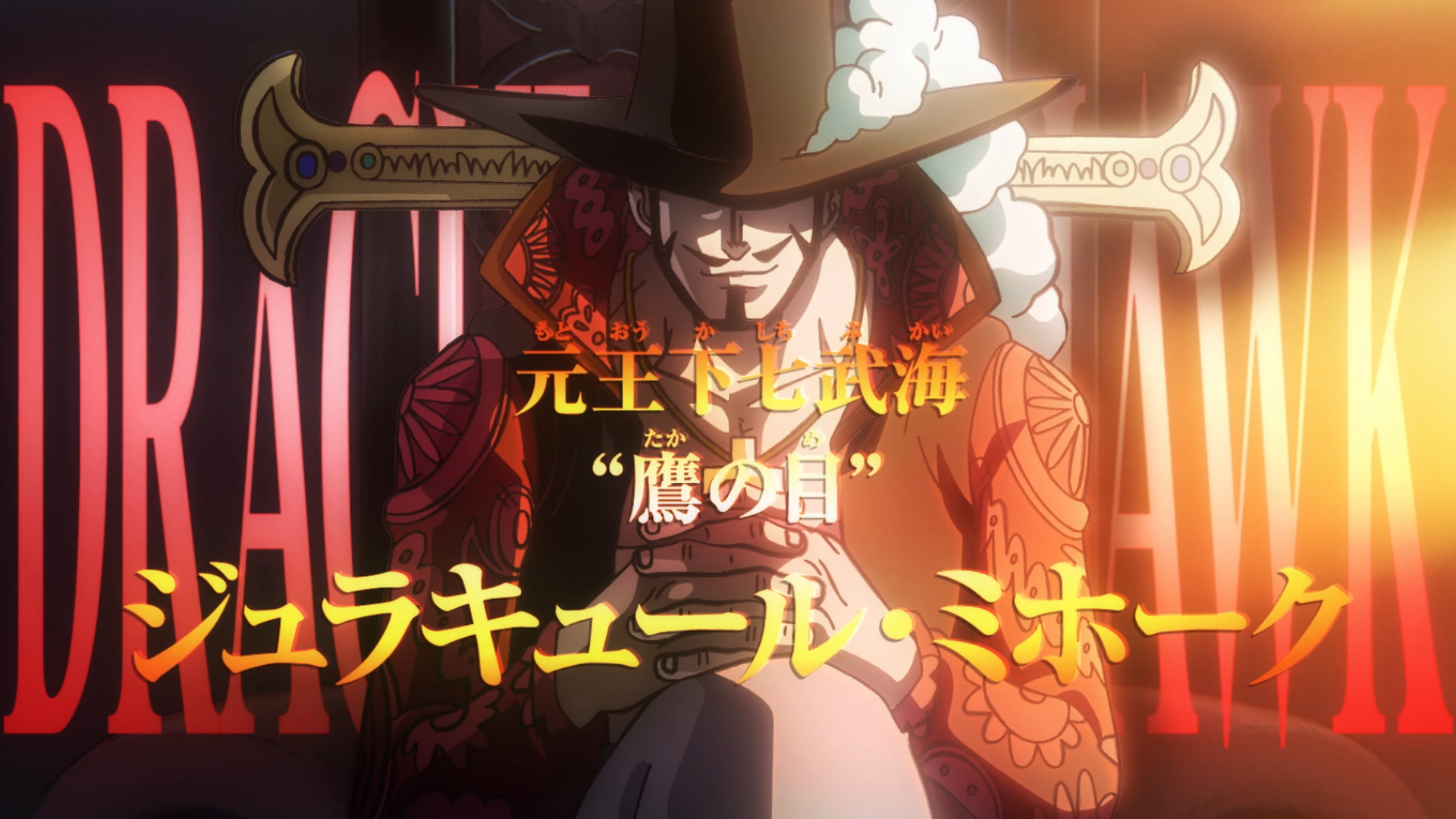 Being tall and having a pale complexion, Dracule Mihawk sports a short 🧔🏼 black beard with the sideburns pointing up. Note that he was not wearing a beard 24 years ago at the time of the execution of the Pirate King Gol D. Roger. He owes his epithet to the strange color of his eyes, which are similar to those of hawks. In the manga, we see them red while they are presented as yellow in the anime.

Clothing-wise, Mihawkwears clothes adorned with red and black as well as a necklace 📿 with a crucifix-shaped pendant that turns out to be a Kogatana (a small dagger). He also wears a hat on his head with wide brims and decorated with a large plume. Added to this, we also see him with a long black and open cape. Thus dressed, he has the appearance of a Spanish fencer. When he was in his castle on the island of Kuraigana, he wears an open white shirt and different pants. He was also seen there wearing a dark draped cloak over his shoulders.

To date, Dracule Mihawk is the only Shichibukai whose actual bounty for capture has not yet been revealed. It should be noted that all of the Corsair Captains had a bounty of around 100,000,000 Berrys when they worked out a compromise with the World Government that their bounty would be removed or frozen if they agreed to work for them to eliminate other pirates 🏴☠️ present on the Grand Line. Thus, after their group disbanded, these Grand Corsairs found themselves once again considered mere pirates to be arrested with a new capture bounty attached. Since this character is the best swordsman in the world, he is considered by the World Government to be very dangerous. Moreover, according to some fans, the fact that he has become friends with Shanks again and that the two protagonists may one day join forces should make Mihawk's bounty a rather substantial amount. This is despite the fact that Mihawk is seen as a pacifist. Some estimate his next capture bounty to be over 2,000,000,000 Berrys. 💰 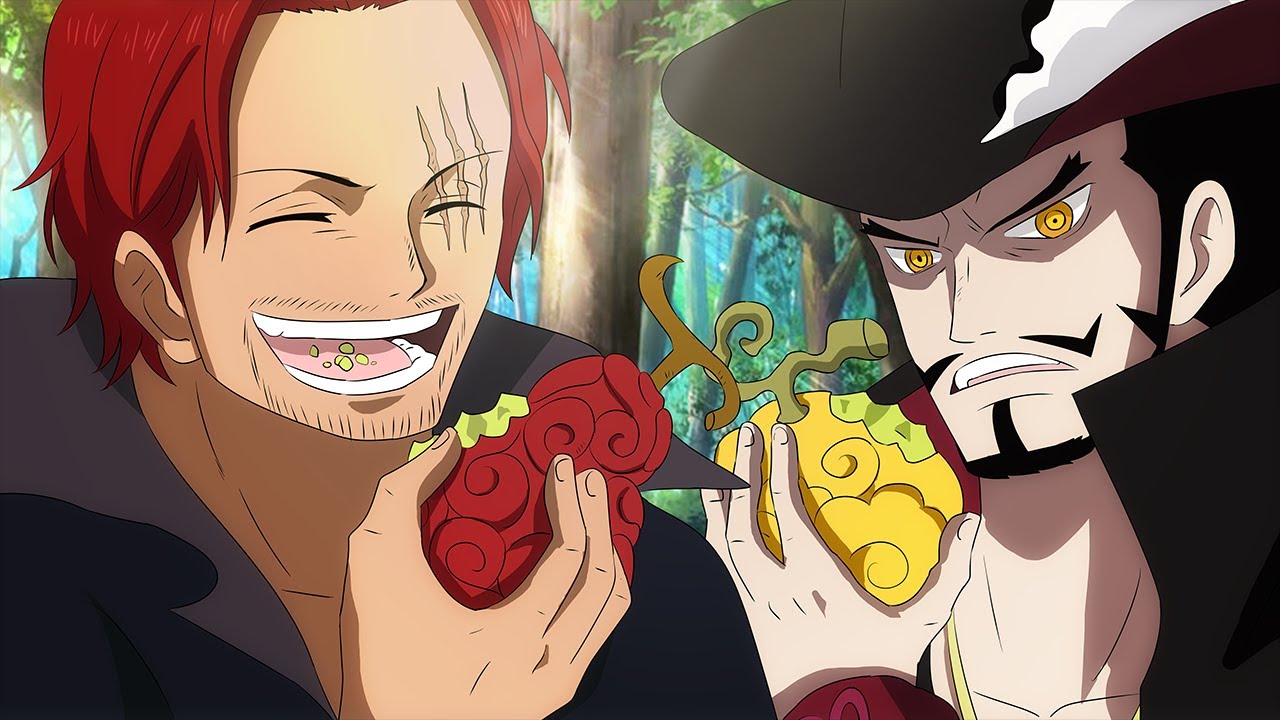 Dracule Mihawk is considered to be the most powerful of the 7 Great Corsairs and a nearly invincible Pirate. His power is said to equal that of the Admirals and even the Four Emperors, despite the fact that he is one of the characters in the series to not have a Demon Fruit 🍇. While many fans consider that he never ate Demon Fruit because it would ruin the character's credibility, others believe that he did eat it anyway, but that it has not been revealed yet. Indeed, some speculate that he took a Demon Fruit in connection with his epithet Hawk's Eye and his hawk-like eyes. Others believe that his incredible speed of movement is due to the power he acquired thanks to Soku Soku no Mi, a Paramecia type Demon Fruit. 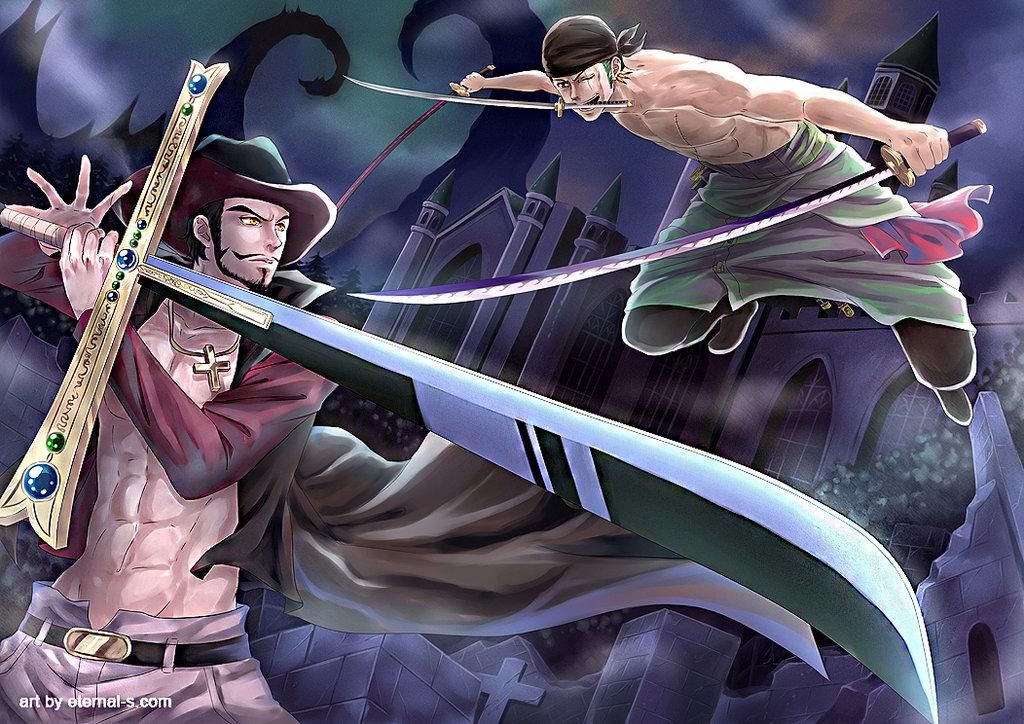 Throughout the series, Mihawkhas fought several times against different characters without ever losing. Either he was always victorious or the fights 🥊 were interrupted for one reason or another. Of all his clashes, we can mainly remember two that are memorable. They are his confrontation against Shanksand the one against Zorowho will later become his apprentice.

In the past, Dracule Mihawk has always been the main rival of one of the most powerful pirates of the time, namely Shanksthe Red. The two have even clashed on numerous occasions, even on a daily basis. Their battles have always been epic due to the fact that one is the greatest swordsman ⚔️ in the world and one of the 7 Great Corsairs while the other is one of the Four Emperors and the apprentice of the Pirate King himself, Gol D. Roger. The clashes between these two legends would have been such that they resounded throughout the Grand Line. However, to this day, we don't know the final outcome and who really came out on top, especially since Mihawk decided not to face Shanksanymore when he lost his left arm 💪🏼 when he saved Monkey D. Luffy. After that, these two characters became good friends. 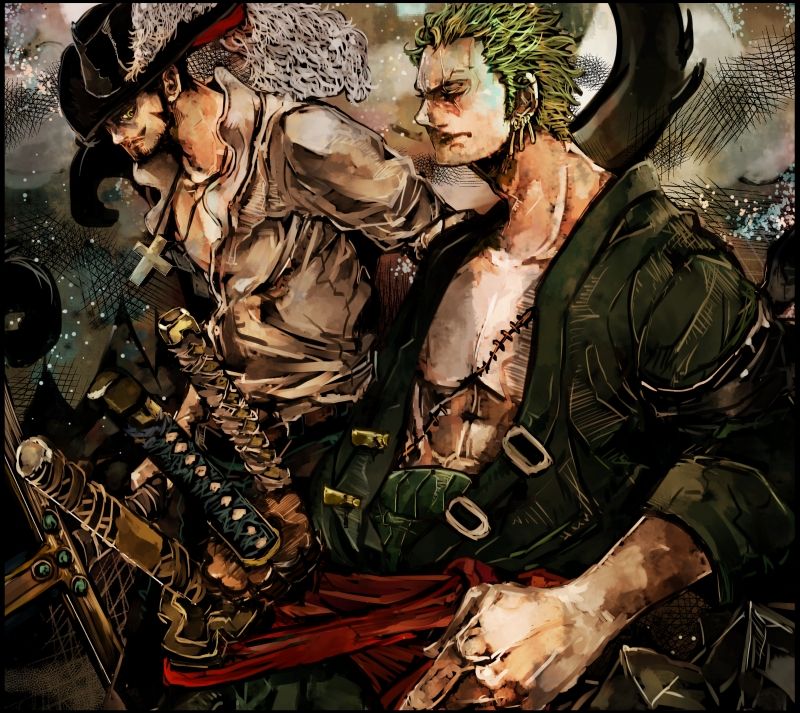 Since his childhood, Roronao Zorohas always promised himself to become the greatest swordsman in the world. This is his only goal in life and to achieve it, he set out to seek out and fight the one who holds this title, namely Dracule Mihawk. After joining the Straw Hat Crew, he had the good fortune (or rather the bad fortune) to meet Mihawkand, without hesitation, he fought him in the Baratie Arc. Unfortunately for him and despite his skills to fight with three swords, the confrontation was very short even if Mihawk fought him only with his Kogatana. 🗡️ Despite the fact that this fight was dispatched at lightning speed, Mihawkwas still impressed by his determination, courage, sense of honor as well as his incredible desire to become a great swordsman. As a sign of respect, he inflicted a large scar along his torso with his legendary sword and asked him to train so that one day he could surpass him. 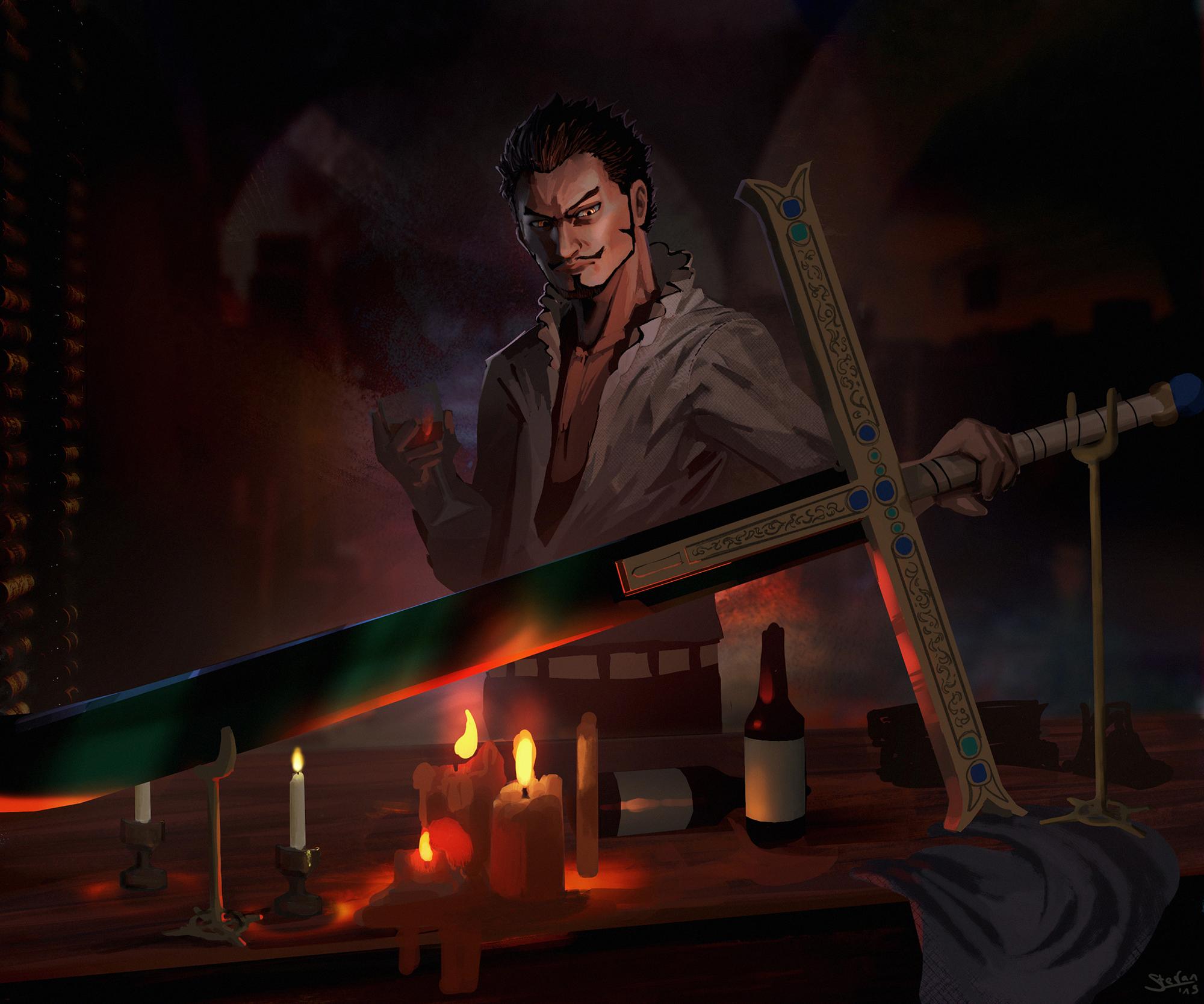 As mentioned above, Mihawkholds the title of the greatest swordsman in the world. According to Zeff, he is even the strongest swordsman that has ever existed. Indeed, his power is such that he can cut through steel without any trouble like when he defeated the hitman Daz Bones aka The Assassin with one blow while the latter's body is made of razor-sharp blades 🪒 thanks to the Demon Fruit Supa Supa no Mi. Mihawkwas also able to cut through a giant wave that was frozen by Navy Admiral Aokiji. Moreover, it is extremely easy for him to wield his gigantic sword despite his size and stoutness.

Moreover, this Shichibukai possesses other skills, such as his very powerful vision, which actually earned him the epithet of Eye 👁️ of Falcon. As proof, he was able to find Luffy during a battle while the latter was moving in Gear Second. As another example of this ability, he was able to not lose sight of Luffy at the same time as he was battling Vista À la Lame Fleurie. He also possesses other abilities such as extraordinary speed and incredible reflexes. Finally, Mihawkis also able to fight with his hands alone, as he did in his battle with Zoro. 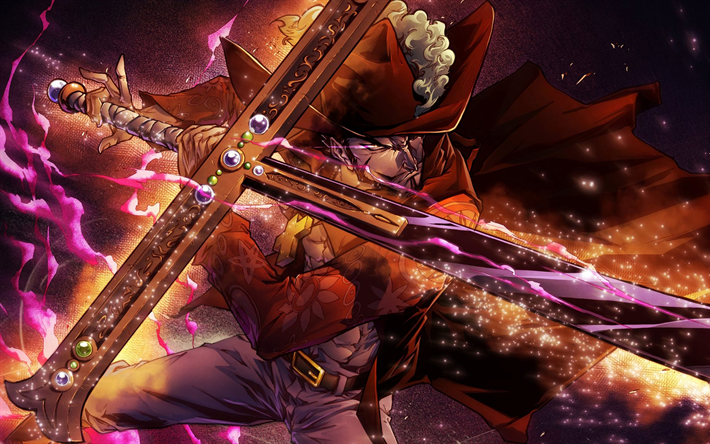 The Kogatana mentioned above is Mihawk'ssecond weapon. He usually uses it to defeat opponents who do not deserve to die from his sword. Thanks to his incredible swordsmanship, this small dagger becomes a deadly weapon against both mediocre and talented enemies like Zoroand his three blades. He also uses it as a knife to eat. 🍽️

Mihawkalso has a black sword that is over 2 meters long and is known as Kokuto Yoru. This is considered to be one of the 12 most powerful swords ever created in the world, the 12 Saijo Ô Wazamono. When he is not using it, he puts it on his back. This sword displays a curved blade and also comes in the form of a crucifix. ✝️ Its golden guard is embellished with red beads in the manga or blue and green in the anime. Mihawkhas swaddled the hilt of his sword with bandages and the tip is rounded at the end. Dracule Mihawk, alias Hawk's Eye, masters two Hakis, namely Kenbunshoku no Haki or Observation Haki and Busoshoku no Haki or Weapon Haki. He seems to have an excellent mastery of the latter given that he taught Roronoa Zoro to use this Combative Fluid so that he no longer breaks his swords. ⚒️ 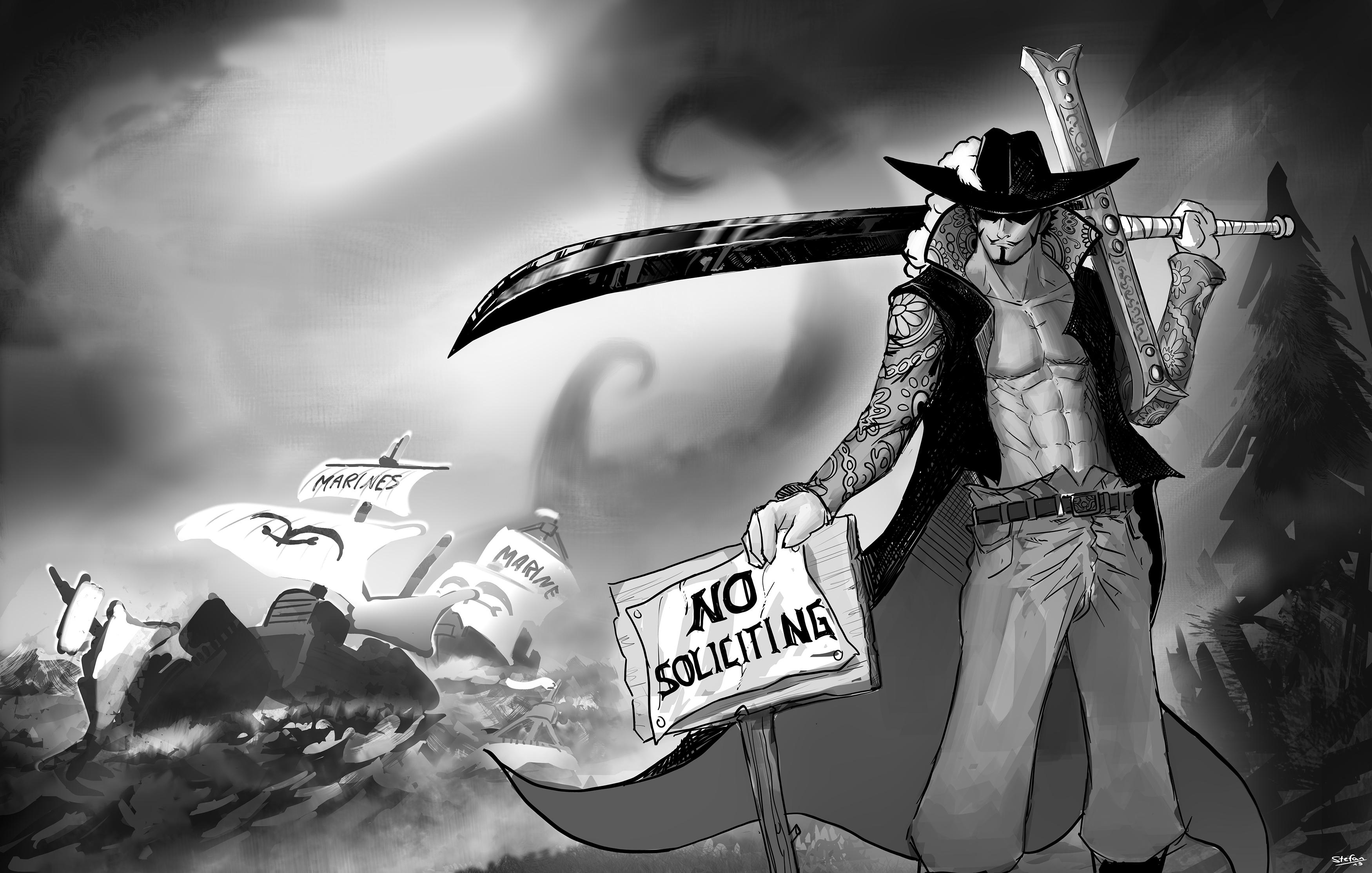 Dracule Mihawk is part of the so-called older generation of pirates along with Whitebeard, Shanksthe Red and others. In fact, he was present at the execution of the Lord 👑 of the Pirates Gol D. Roger 24 years ago before the beginning of the One Piecestory. While he was still just a pirate, he had Shanksas his great rival and with whom he frequently clashed until the latter lost his arm. After that, Mihawkstopped fighting him and became one of the 7 Great Corsairs in the pay of the World Government (although he never liked it). At the same time, he was awarded the title of the best swordsman in the world. 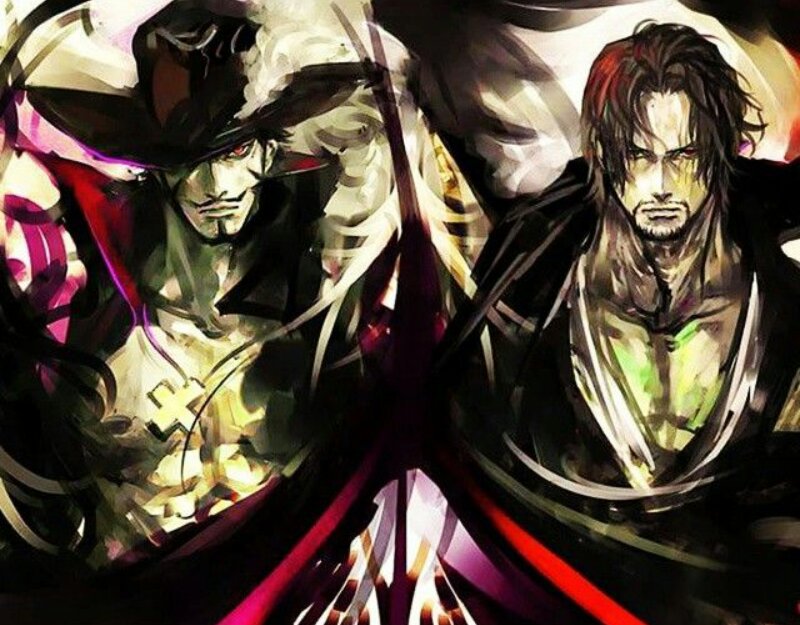 Mihawk'scharacter appears in the Baratie Arc when Don Krieg and his entire fleet ⛵ disturbed him in his sleep while they were crossing the Grand Line. To amuse himself and kill time, he set out to single-handedly destroy all 50 ships in the fleet. And it is while pursuing them that he met Zoroand that they confronted each other for the misfortune of the latter. We then see him in the Loguetown Arc when he visited Shanksthe Red on his island and was invited to a banquet. In the Jaya Arc, he participated in a summit meeting at Mary Geoise with the Navy and the other Corsair Captains to decide on a replacement for Sir Crocodile. 🐊 Indeed, the latter got laminated by Monkey D. Luffy. During this meeting, they discussed, among other things, the rise of the Straw Hat Crew. Since that day, Mihawk has paid special attention to Luffy and Zoro.

It was during the Battle of Marine Ford that Mihawkplayed a big role in the series. After another meeting at Mary Geoise, he was given the task of confronting Whitebeard and his allies. During the battle, he threw a mighty sword at Edward Newgate in an effort to determine who was more powerful between him and the man who is considered the strongest man in the world. 🏋🏼 However, his attack was stopped by Diamond Joz, the commander of the 3rd division of the Whitebeard Crew. He then fought Luffy with several long-range sword attacks. Luffy managed to escape before being protected by Vista on Marco's orders. Later, when Red Shanksarrived on the battlefield, he decided to leave, stating that he had come to fight Whitebeard and his cronies, not Shanks.

It was upon his return to his island that Zoroasked him to train him. Having at first refused since they both still had to face each other again in the future, he accepted when he learned that Zorohad defeated all the humandrakes of the island 🏝️ and especially that she was his reason. Indeed, Zorowas willing to put aside his sense of honor and beg the one who defeated him soundly for Luffy, his captain. After Zorowas healed, he trained him during the two-year ellipse. And it was in the Wano Kuni Arc that Mihawkthe Hawk-Eye learned that the Pirate Captains group had been disbanded. The news of becoming a pirate hunted by the Navy again excited him to no end.

Being unmanned, 👿 Dracule Mihawk is nonetheless a fighter known for his great power. Feared by many, his fame as the World's Best Swordsman has not been denied to this day.

If you too, like Mihawk, are excited at the idea of being hunted by the Navy, don't hesitate to join one of the pirate crews ☠️ that abound on the Road of All Perils. Don't hesitate like Zoroto train hard and challenge the World's Greatest Swordsman to prove your skills. Also, treat yourself with the Mihawkdedicated goodies available on our online store.