Let us start with our protagonist with the username Kirito. As he was one of the beta testers, he got a ridiculous amount of power and abilities, not to mention his weaponry. But anyway, good for him. Let us do our job and see what kind of powers he got. 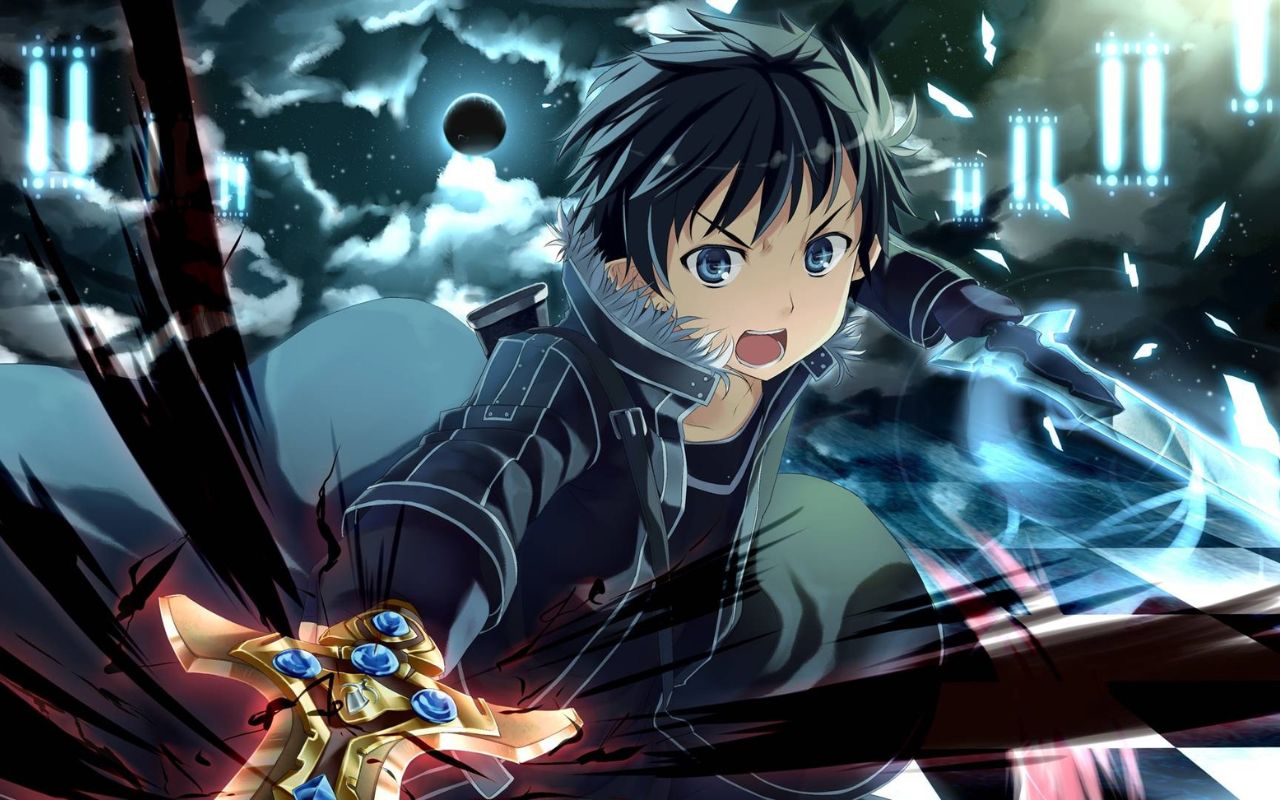 Kirigaya Kazuto is a 14-year-old kid who was one of the chosen few to test the beta version of Sword Art Online. It gives him a clear advantage above all when he re-entered the game using Kirito as his username. Due to his utter skills, he was also known by the name Black Swordsman. He got into relationships in the virtual world too. He married Asuna and adopted Yui (an AI). She was her daughter inside the game.

He was just a normal human child outside the game but a complete monster when inside. Some of his game abilities consist of:-

Of course, this kind of power makes him one of the strongest characters in SAO but not unrivaled. This brings us to second place.

Everyone who has seen Sword Art Online has heard the stories of Heathcliff. His powers and intelligence combined bring him to the second sport on our list. He is one of the fearsome antagonists and the prominent villains of the Aincrad arc. 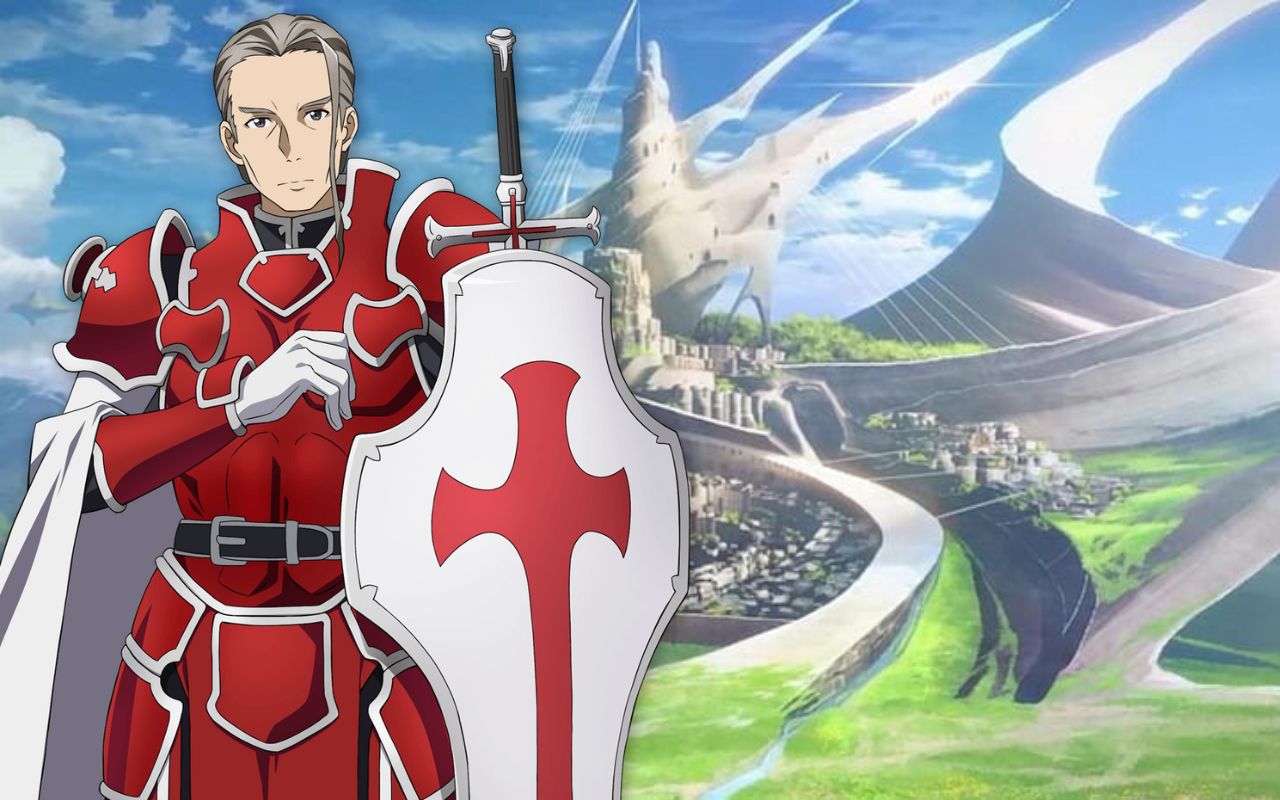 Kayaba Akihiko was the development director of SAO. Logged in with the username of Heathcliff, he was the mastermind behind the idea of the slaughterhouse Aincrad and the designer of the Cardinal System, Nerve Gear, and The Seed. He carries a one-hand sword and tower shield called Liberator. Heathcliff was named Man of Legend because of the incident when he cleared the 50th floor all by himself in 10 minutes. Also known as the strongest player in the entire game and was a force to reckoned with.

It was rumored that Heathcliff HP never reached the yellow line. These facts make him a strong enemy and make the storyline even more interesting.

Asuna is the companion of Kirito and one of the strongest characters in the story. In the real world, she was the daughter of the former CEO of RECT Inc. Captured in-game along with 10,000 others, she was one of the 300 who remained after the game was completed. She remained in the spotlight in the Aincrad arc and is one of the fan-favorite characters of SAO. 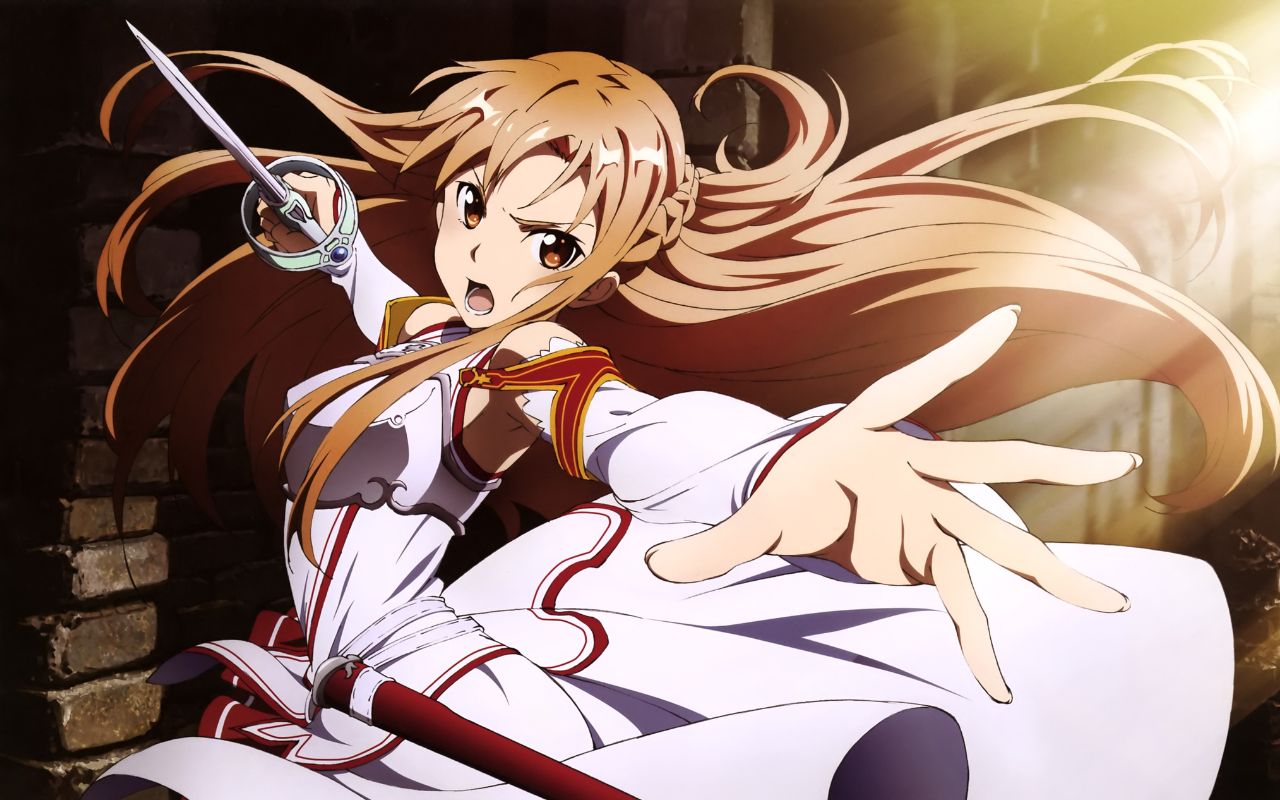 Asuna was the main heroine of SAO. She raised her rank very fast and became the Sub Leader of Knights of the Blood Oath. She got incredible power and skills. People also call her The Flash due to her lightning-fast speed and skills as a swordsman. After she meets Kirito, she helps him clear the game, and she falls in love with him, leading to their marriage. Their love was eternal, but they were never really able to get married in real life. Asuna was captured and taken hostage in the next arcs, not quite justified with his character, but it was the story’s need.

One of the newest characters of SAO, Alice, is one of the main characters in the Alicization Arc and a supporting character in the Unital Ring Arc. Kirito and Eugon were her childhood friends, but she was taken away by soldiers to make her an Integrity Knight.  She was the daughter of Gauspht Zuberg, chief of the village. Alice was a girl with quite a hand in majestic arts and became a strong Integrity Knight. She becomes popular among fans instantaneously after her first appearance. One of the top 5 most powerful characters of Sword Art Online, she once managed to take on both Kirito and Eugon. 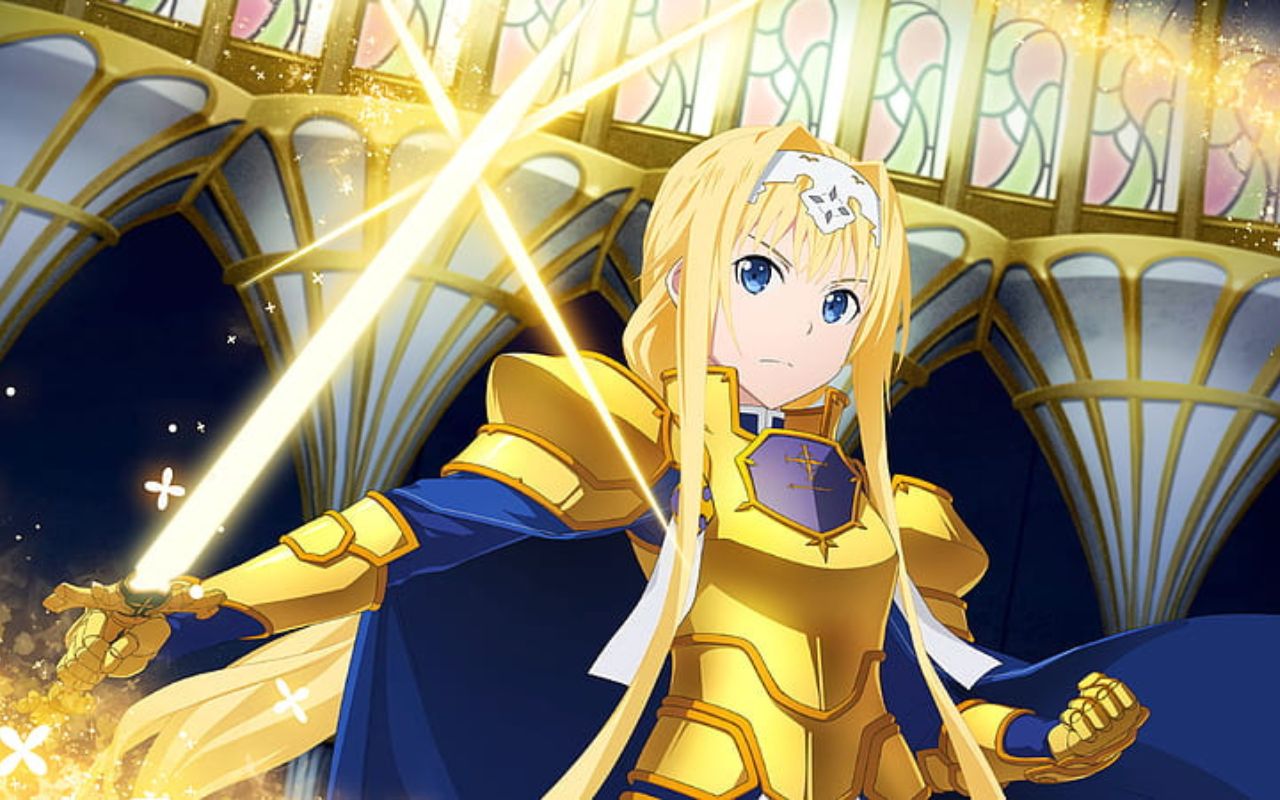 She was forced to become an Integrity Knight, but she made her way to help her childhood friends Kirito and Eugon to fight with human civilization against the invasion of the Dark Territory Army.

Fairy King Oberon is the main antagonist of ALfheim Online, Fairy Dance arc. In the real world, Sugou Nobuyuki is the chief of the research institute of RECT Inc. as well as Asuna’s ex-fiance. Sogou holds a grudge against Asuna because of their broken engagement and always tries to kill Kirito and do pervert things to Asuna. He is one of the strongest characters in ALfheim Online due to his high status and power in the real world. He is a very greedy, rich, smart, self-centered psychopath, which makes him a villain out of the virtual world too. 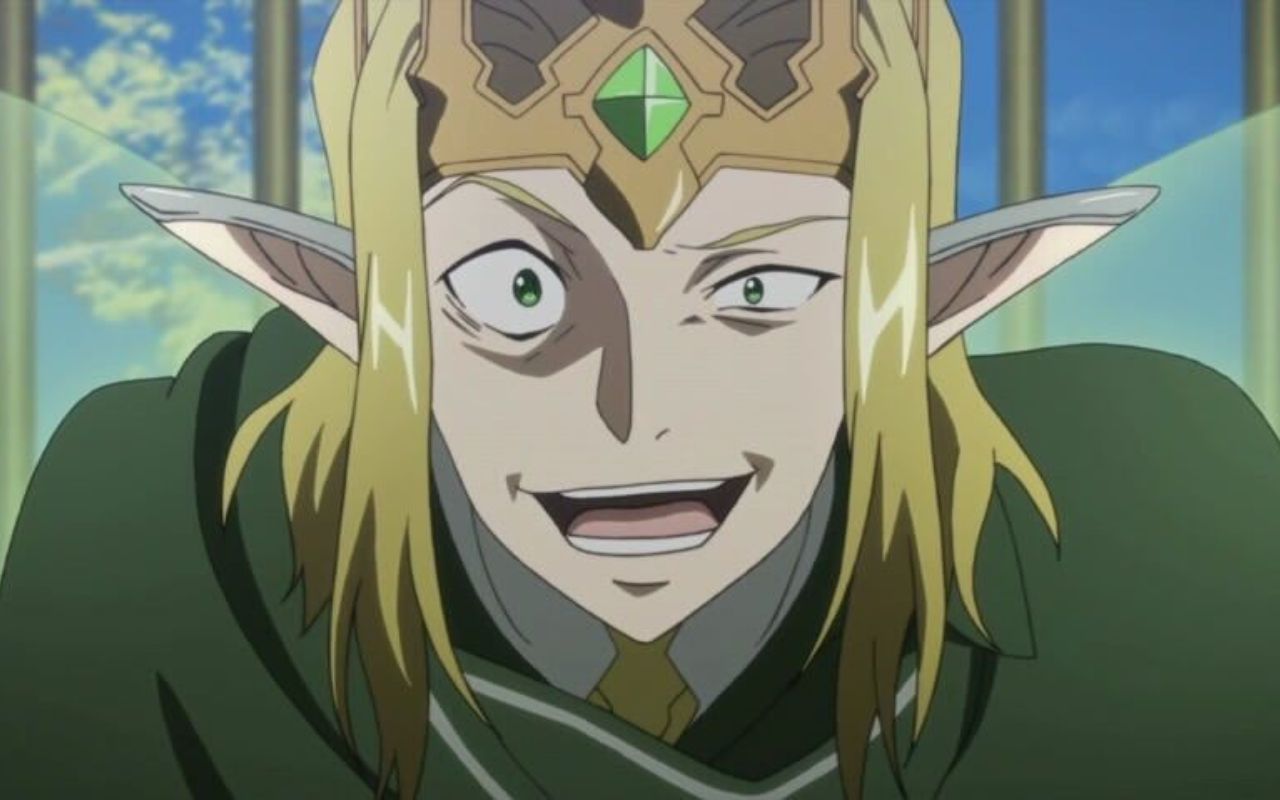 Of course, many can debate that there were many more strong characters than Oberon in SAO. Some characters were very close runner-ups but didn’t make it to this list. Here are some honorary mentions: Yui (Kirito and Asuna’s adopted virtual child), Shino Asada, Eugeo, and Tiese Shtolienen. But we must also consider their intellectual power and influence into consideration. An elephant may be stronger than a lion, but a group of them can flip the frame in an instant. With that in mind, here we conclude our list of the top 5 most powerful Sword Art Online characters. Hope you like it!